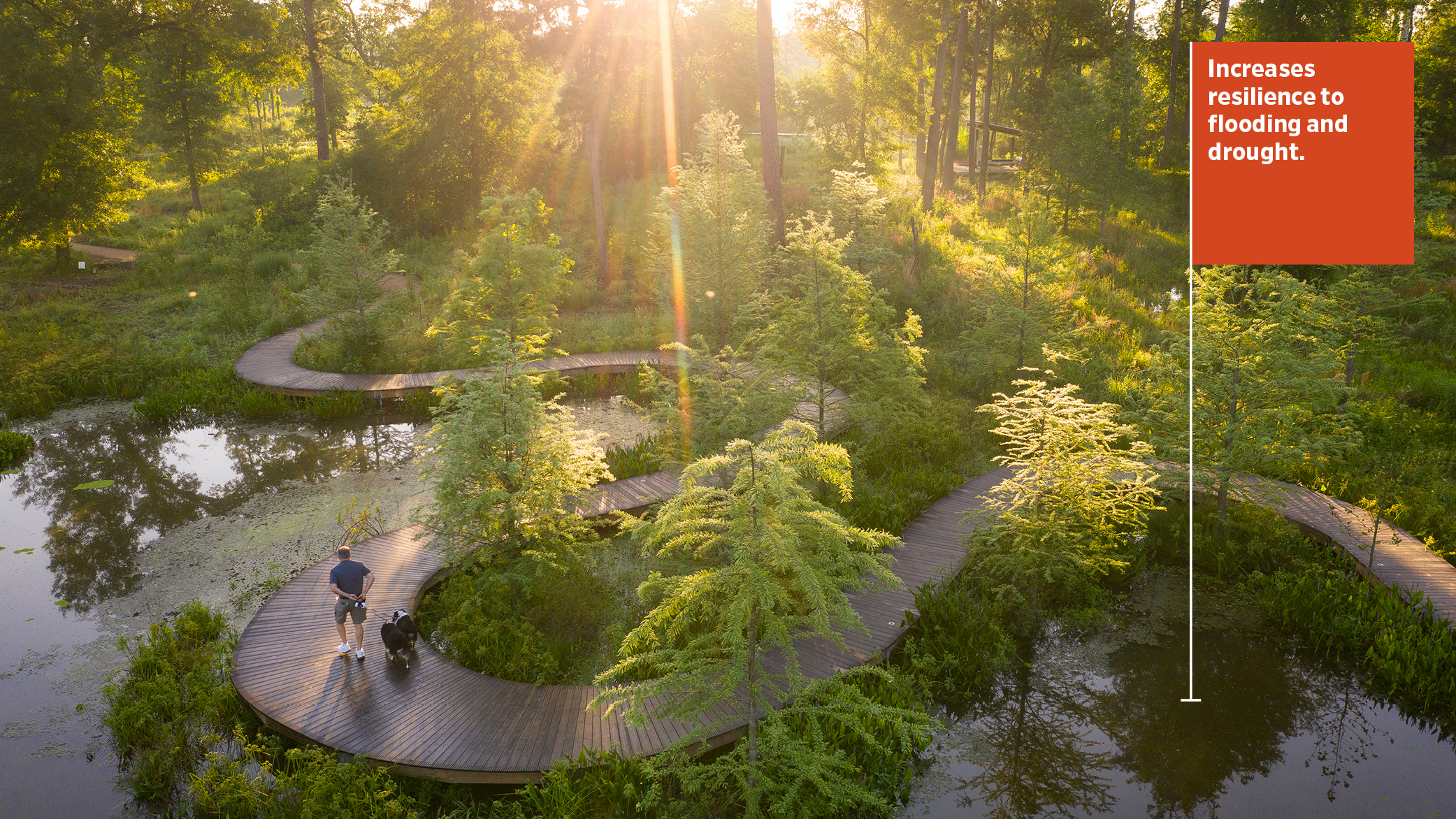 By 2012, more than 50 percent of the tree canopy of the Houston Arboretum and Nature Center had been lost due to high winds caused by hurricanes and years of drought. Through a comprehensive analysis, landscape architects with Design Workshop and Reed Hilderbrand discovered that the areas of the 155-acre Arboretum most prone to tree loss were once grassland ecosystems and therefore not naturally suited to be woodlands. By removing trees and restoring the original prairie, savannah, and woodland ecosystems found at the Arboretum, the landscape architects designed a landscape naturally resilient to future climate shocks, such as more frequent and severe hurricanes, flooding, and drought.

Located in central Houston adjacent to highway 610 and about six miles from Downtown, the Arboretum is a refuge for native plant and animal life, environmental education center, and a respite from urban life. Founded in 1967, the Arboretum descends from an earlier arboretum that was established as part of the 1,500-acre Memorial Park, which was planned in 1925 by Hare and Hare.

The Arboretum is found alongside the Buffalo Bayou at the convergence of three major ecosystems that define the region: the piney woods from East Texas, the gulf coast prairies from the Southeast, and the post oak savannas to the West.

During the development of a new master plan for the damaged site, landscape architects with Design Workshop and Reed Hilderbrand – along with a team of ecologists, scientists, and engineers – investigated the soils, micro-topography, and vegetation of the site in order to determine the baseline conditions and patterns of tree mortality. The team discovered that the areas with a combination of soil profiles and drainage patterns that had historically sustained coastal prairie ecosystems were also the areas of greatest tree canopy loss – where 70 percent or more of the trees died.

Over centuries, wildfire and buffalo grazing had maintained a more open prairie and savanna landscape in the Houston region. As Houston expanded, these natural disturbances disappeared, and the site became overly wooded. To restore ecosystem diversity and function, the design team convinced Arboretum stakeholders to reset the endemic grasslands instead of reforesting.

The prairie and savanna ecosystems are more resilient to droughts and floods while providing greater ecosystem services for the Arboretum. The new ecosystems are adept at absorbing and filtering stormwater and bouncing back from flooding or drought. The resulting design establishes a diverse, robust, balanced, and ultimately resilient landscape of native prairies, savanna, wetlands, wooded ravines, and riparian corridors endemic to southeast Texas.

Design Workshop and Reed Hilderbrand worked with Arboretum stakeholders to persuade the public of the ecological value of the new aesthetic. With its new diverse ecosystems and reduced tree canopy, the new Arboretum provides a different spatial experience and a greater variety of destinations.

The first phase of the project, which covers 65 acres, restored the ravine landscape and created 20 acres of new prairie and savanna ecosystems. A 2019 analysis found that within these new ecosystems, there are on average 21.6 species per square meter, which demonstrates the diversity and resilience of the restored landscapes.

Stormwater is now captured in the Arboretum’s parking lots and carried to two wetland ponds that have been designed to clean, slow, and use stormwater. These new water bodies help alleviate pressure further down the watershed for small- and medium-sized storm events.

The ravine area reopened after being intermittently closed for five years due to flooding. Working with geomorphologists and structural engineers, the landscape architects restored the historic riparian ecosystem in order to reset the natural landscape and allow it to better respond to the future impacts of climate change.

The team used natural stable channel design techniques to reshape the channel, slow water, and stabilize highly eroded slopes. The new trail system, including an expanded boardwalk system of fiberglass decking and two large bridges, gives visitors the opportunity to re-engage with the ravine landscape. All materials were selected and engineered to withstand heavy floods.

The landscape architects also developed a range of management strategies, including adjustments and tactics to support ecological restoration over the long term. To implement these, the Arboretum often engages community volunteers. The Arboretum’s environmental educational efforts promote the use of native species and pollinator plants and explain the importance of diverse ecosystems to human health and well-being. 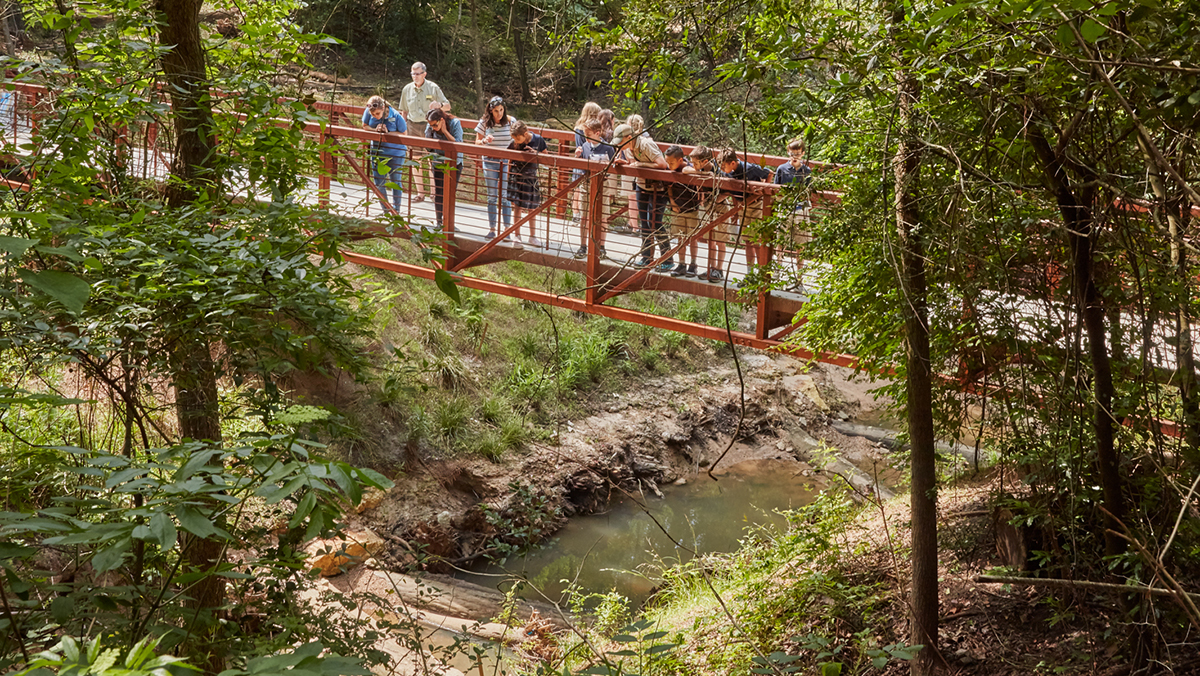